‘What did we learn from the Cameron Inquiry?’: N.L. still sending tests to U.S. to determine breast cancer treatment plan

ST. JOHN’S, N.L. — Eastern Health is still unable to recruit specialty pathologists to complete testing within the province to determine how a patient is treated for breast cancer.

Since early 2014, Eastern Health has been sending some highly specialized tests for breast biomarkers to Vitro Molecular Laboratories, in Miami, Fla., Eastern Health confirmed in a statement Friday, May 27, adding the U.S. lab is an accredited laboratory with exceptional turnaround times.

That was the situation with the testing noted by SaltWire Network in a special report on the 10th anniversary of the Cameron Report in 2019, but at the time, Eastern Health officials had said it was aiming to eventually return the testing to the province, though they would be sent away for the foreseeable future.

That Eastern Health is still struggling to recruit the particular pathologists is unsettling for one St. John’s woman who is set to receive treatment after finally receiving her test results from the U.S.

She didn’t want to be named, due to wanting to keep her breast cancer diagnosis a personal matter.

She said she can’t understand why the recruitment problem is still unresolved.

“What did we learn from the Cameron Inquiry and all the money we paid out?” she asked. 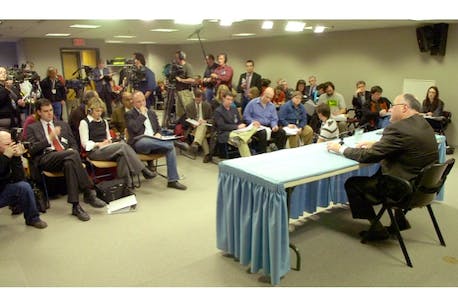 She questioned the priorities of the Department of Health and the provincial government.

“They just gave half a million to Labatt Brewery. … That could pay a nice pathologist (salary),” she said, referring to a recent federal-provincial government announcement that it would cost-share an efficiency and fuel switching project at the St. John’s brewery as part of greenhouse gas reduction initiatives (in addition to the company’s $500,000) through the Low Carbon Economy Leadership Fund agreement.

Waiting on the results added to the anxiety of dealing with a breast cancer diagnosis, the woman said.

“You are concerned — you don’t know what kind of treatment you are going to get. It’s just another wait in the process,” she said.

“They just gave half a million to Labatt Brewery. … That could pay a nice pathologist.”

‘There must be a plan’

One of the recommendations of the Cameron Inquiry’s report in 2009 implored, “While the province has substantially increased the benefit package available to pathologists in this province, there must be a plan developed to ensure the sustainability of this professional group. … The regional health authorities must also continue to ensure recruitment and retention of pathologists is given high priority.”

At the time, the department said there was a strategy in place to recruit and retain physicians, including pathologists. (The recruitment and retention of doctors has continued to make headlines).

In Friday’s statement, Eastern Health explained estrogen and progesterone receptor (ER/PR) and HER2 fluorescence in-situ hybridization (FISH) tests are sent to the Miami lab because clinicians prefer that ER/PR and HER2 FISH tests on all breast specimens are performed at the same laboratory.

While Eastern Health does perform ER/PR tests on non-breast samples that do not require HER2 FISH testing, it said it currently does not have the required number of specially trained pathologists to interpret breast biomarkers.

The health authority said it continues to work diligently to recruit additional sub-specialty breast pathologists to interpret these tests.

In 2021, the cost of sending ER, PR, HER2 immunohistochemistry on breast tissues with reflexive HER2 and FISH tests to the Miami lab was approximately US$294,600.

The Cameron Report resulted from an inquiry into the biggest health-care scandal in the province’s history.

About 425 breast cancer patients received the wrong results from ER/PR tests — used to determine treatment options — between 1997 and 2005 from what was then the Health Care Corp. of St. John’s.

The errors were discovered in 2005 at Mount Sinai Hospital in Toronto — the same year that an amalgamation of services made Eastern Health the largest health authority in the province.

The communication with patients about the mistakes and new testing results was so fraught with delays and misinformation that the debacle prompted the inquiry in 2007. Ninety-eight witnesses testified over 128 days in 2008.

Thousands of breast cancer patients were ultimately retested as a result of the errors and Eastern Health settled a $17.5-million class-action lawsuit.

In the wake of the scandal, the numbers of those affected changed at different times, and in 2010, it was said 126 breast cancer patients had died since the errors were discovered, though it cannot be known if the deaths were attributed to treatment decisions associated with the errors.

In 2019, Eastern Health told SaltWire it did not follow the patients as a research cohort after those initial updates, so it could not state exactly how many women affected by the errors were still alive at that time.

The provincial government allocated $21.4 million in its 2009 budget to respond directly to the Commission of Inquiry on Hormone Receptor Testing Report and the Task Force on Adverse Health Events Report, including expenditures to enhance laboratory services, cancer care and health information management.

New AACR president aims to ‘impact the next generation’ through mentoring, opportunities